DNV.co.uk uses cookies to give you the best possible experience on our site. By browsing the site you agree to our use of cookies. You can click “Close” to remove this message. For more information please visit our cookie information page. 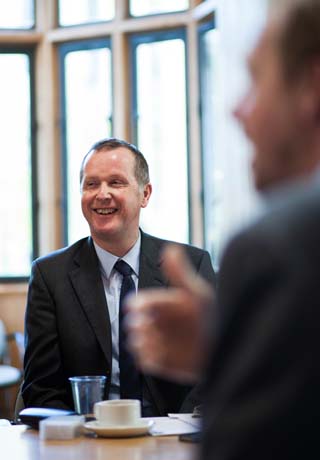 Last week I was talking to the person responsible for sustainability in a huge global multinational. The conversation was part of a confidential exercise for another customer, so I won’t reveal more about either company’s sector or geography, but the point of raising it is that the conversation turned to their reporting journey. I complimented them on their recent efforts towards a more integrated report. The Sustainability Director’s response was enlightening: ............
Mark Line

They said, "To be honest, it’s a pain.  You simply can’t include everything relevant in one Annual Report and still expect people to read it.  And so to compensate, we’re having to produce an increasingly lengthy, technical appendix as well – and neither the Annual Report, nor the Appendix, meets all the needs of our various audiences”.

Considering that, in my opinion at least, theirs has been one of the better recent experiments with Integrating Reporting, I expected this Sustainability Director to make a stronger assertion of the benefits achieved.  But was their frustration surprising?

If I’m honest I rarely hear very positive things about Integrated Reporting, at least in private conversations with companies.  What I heard last week chimed with another discussion we had recently, at our regular client Roundtable’s in London.  This one was on the future of assurance .  We were lucky to have Rowland Hill, Sustainability and Reporting Manager for M&S join us as our lead speaker.  My colleagues at DNV GL have just finished the first cycle as Marks & Spencer’s assurance provider, and we were grateful to Rowland for his support - and also the ten other companies in the room which participated in the debate.

One of the themes we discussed at the Roundtable was, again, Integrated Reporting, focussing on everyone’s experience of the pros and cons.  Rowland explained that M&S had decided to not go down the route of Integrated Reporting because they felt an integrated report wouldn’t go in to sufficient depth to meet all the needs of their non-financial stakeholders, so they would just end up duplicating their reporting efforts.  A few of the other participants said their companies were still grappling with the concept, with varying degrees of success.

Since its original inception in 2009, the International Integrated Reporting Council (IIRC) has been working to shine a light on how this goal should be achieved.

Its vision is: “… to align capital allocation and corporate behaviour to wider goals of financial stability and sustainable development through the cycle of integrated reporting and thinking.”

Of course the desired objective of an Integrated Report is to provide report users with an overview of all the information they need to understand company performance, including the relevant social and environmental aspects - in so much as they contribute to understanding the success of the business.  The primary audience for these reports are investors, so there is an emphasis on explaining material ‘non-financial’ impacts in monetary values.

At the heart of the <IR> concept is the ability to show to investors how a business creates value over time and the primary mechanism for achieving this is:

“… a combination of quantitative and qualitative information, which is where the six capitals come in".

The six capitals are ‘financial, manufactured, intellectual, human, social & relationship and natural. But much like Integrated Reporting’s predecessor concept of ‘triple bottom line’ reporting, coined by John Elkington as far back as 1994, a central problem remains.  If we are going to be able to explain whole company performance in a way that truly integrates financial aspects with other less tangible aspects, then we will need a generally recognised mechanism for measuring non-financial capitals using accepted common metrics.  And as the target audience is limited to investors, the basis for achieving that integration is only explained in financial terms.

Over twenty years later, I don’t believe we are much closer to achieving this goal.  We are all familiar with the challenges posed by comparing apple with pears, which has impacted progress in measuring social and environmental performance for decades.  Despite some notable breakthroughs, the underlying intellectual challenge is that our perceptions of impact will always be informed by our personal values.  So there can never be a single ‘one-size-fits-all’ solution which will enable us to consistently say, for example, that 1,000 jobs created is equivalent to a habitat lost.  And that problem just becomes more complex in a truly multinational setting where values and attitudes are so influenced by local and national culture and belief systems.  Taking account of differing values when measuring impact is  closely related to understanding ‘stakeholder expectation’, which is why I think the goal of producing reports that are meaningful for investors is dangerously reductive.  You can’t explain ‘value creation’ to one audience without fully understanding how value is perceived by all of the other groups which are affected by, or have the capacity to affect, a company’s performance.

The consultation draft of the <IR> Framework was published in April 2013.  We are currently in the so-called ‘Breakthrough’ phase which runs from 2014-17.  I am not so sure when the expected revelatory outcome will be achieved.

If I look around many of the companies that we encounter – and their own work on more integrated reporting, all is not lost.  Where we see the greatest steps forwards are with those companies that are experimenting with combining different types of financial and non-financial information in the same report. We call this ‘combined reporting’ which is perhaps more honest that the claim of ‘integration’.

Nevertheless, it is hard to find many examples of companies that have cracked a solid way of deciding what to include in their Annual Report.  There is a growing trend towards producing an Annual Report supported by technical appendices, or separate ‘data centres’ online, where interested report users can find more information, if they want.  Quite how these differ from the ‘bad old days’ of comprehensive Sustainability Reports, I’m not sure.  But I suppose one benefit is that, all of this work on more ‘integrated’ reports has shoehorned more relevant information on social and environmental performance into Annual Reports.  Ten years ago these aspects of company performance were rarely mentioned.

From an assurance point of view, what has really been achieved by ‘Integrated Reporting’?  In this post financial crisis world, we are all looking for opportunities for greater efficiency – and one of the claimed benefits of pursuing Integrated Reports is the potential savings that can be achieved by using a single audit firm.

In reality, I don’t think we are any closer to such savings.  The guidance on assurance issued by IIRC so far, have provided no significant guidance on an approach to assurance and I don’t expect more to arise anytime soon.  Where we stand now, the rules that govern audit work require a separate approach for financial and non-financial information.  So what we are seeing is an increasing number of ‘combined reports’ with more than one audit statement in them.  There is no reason to use a single audit firm for both work streams and many companies see the benefit in using financial auditors for the financial aspects and deep sustainability audit expertise for the non-financial elements.

So, in the round, I’m not sure when we’ll achieve the goal of truly Integrated Reports – and the main reason is that their limited audience is self-defeating. The trend towards ‘combined reporting’ for Annual Reporting is nevertheless helpful and I expect that to continue.  But companies that remain serious about responding to the expectations of wider stakeholders will continue to produce fuller, more comprehensive and separate reports.